skip to main | skip to sidebar

Back with Latin Flare: Sirloin Steak with Colombian Coffee Sauce 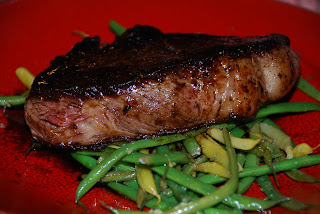 I've been gone for a long time. In the last year, G and I have done an overwhelmingly wonderful amount of traveling. G got the chance to study abroad through his business program and we took it. We packed up and headed to Australia for a few months, and admittedly, I put Cooking Off Book on the back burner in favor of writing about my travels on my other blog, Oh, Nothing Much. (And to be honest, I'm still in the middle of catching that one up as well!)

Before we headed Down Under though, our travels began last Memorial Day Weekend with a visit to my parents in Medellin, Colombia. It's a beautiful city, (you can read more about it on ONM ) and we had an amazing time. As with anything that constitutes an amazing time in my book, there was a lot of fantastic food consumed.

We had two particularly fabulous meals on that trip, one more on the high-end side of things, and one at a very humble roadside restaurant. My parents spent the long weekend shuttling us all around the region, and in the midst of jetting through the countryside, hunger set in. Rodrigo, the hotel's driver, pulled over at little joint that was anything but fancy. It's the type of place that has no walls, and the grills and stove are right there for you to see.

It is also graced with one of the most spectacular views a restaurant could possibly hope for.

Said view overlooks a lake, and that lake is filled with trout. Thus, a trout from this lake was fished out, fried up, and became my lunch. It may have been the best trout I've ever had.

My dad had a chicken stew and G had steak, all of which looked amazing. All of this was accompanied by cold beers – HEAVEN. Sadly, I can't tell you what this place was called or exactly where to find it.

Thankfully, I can definitely tell you where to get the fine dining experience – at La Cava Wine Bar at the Inter-Continental Medellin. (Full disclosure, this is the hotel my dad manages.)

Considering that it's a wine bar, our meal began with the wine – and here they make a show out of serving the wine. Our favorite waiter, Rodrigo (no, the driver isn't also a waiter. Same name, different person) brought out our wine selection and theatrically poured the vino through different aerators.

The salad course was also a show. Rodrigo rolled out a cart and custom prepared our salad in a table side service.

Not all that long before this visit, they started offering a tasting menu at La Cava. Here the chefs get to experiment and try new things. Not every “creation” – as the courses are called on the menu – was perfect, but everything was certainly very tasty and creativity ran throughout. My favorite course was a tuna dish in curry sauce. In total you get to choose four “creations,” all for about $25 US. Pretty amazing and a beautiful evening.

Medellin is very meat-centric, so every trip we eat lots of beef. To be even more specific, G eats it at as many meals as possible during the course of a trip. The thing is that the meat tastes far, far superior to the meat we eat here. Steaks aren't organic or anything, but the cows are for the most part grass-fed just because that's how it has always been done, and when you see them roaming on the hillsides they look very different than ours. They're smaller for sure, but they also look healthier than the giant galumphing elephants that the cows here have been engineered to be. You can really taste the difference.

Now, yes, I have definitely been using this post to reminisce over the food memories of this particular trip, however, that is because it also served as inspiration for G's birthday dinner last year. (And lets face it, that means that this post is only about 10 months in coming, give or take. . . so might as well be a little indulgent at this point.) With all of these happy memories floating about, I thought I'd try to infuse them into the celebration. I consulted my recently acquired copy of The Inter-Continental Kitchen (thanks parents) and found this recipe. I have to admit that, Sirloin Steak in Coffee Sauce seemed quite appropriate, so on to the cooking.

I had been practicing my steak skills in the months prior to this – honestly, I still am. Saveur did a Steak Issue a couple of years ago, and I'd been working on modifying their “Steak House-Style Porterhouse” recipe for my uses. It seems pretty simple in description, but getting it right takes practice – or at least it took me a few tries.

Here's basically what ya do, according to Saveur:

Rub the steaks with salt and pepper and a little canola oil. Then you get your cast iron skillet REALLY hot by heating it in the oven. When it's scalding, transfer the skillet to the stovetop and place in the steaks. Allow the first side to cook until a charred crust forms. They say 7-8 minutes. Then flip to the second side for 2-3 minutes. According their recipe, the steaks are then transferred into the oven for another 7-8 to cook until “medium-rare.” Then melt butter over top, allow the steaks to rest for 5-10 minutes, and enjoy.

This is according to their recipe. However, your steaks will only be medium-rare if you're working with really big steaks. (About 3 lbs.) If you're using steaks that are already portioned to a half-way normal size, you'll end up with deliciously buttered charcoal pucks – which is what we got the first time I tried this. Well done was an understatement. The good news is that the process is even easier. I basically just started skipping the oven step and began getting good results. For smaller steaks, just cooking them in the scalding cast iron pan seems to be more than enough. This was the process I used in preparing the steaks for this dinner. In honor of the delicious meat we always eat in Colombia, I made sure to get really good quality steaks – usually, I'll splurge for grass-fed from Whole Foods or consult our local butcher when I make this.

One more word of warning. This will create A LOT of smoke. Open all of your windows and still expect your smoke detectors to beep like crazy. I wouldn't suggest anyone else try anything risky, but we've taken to disconnecting ours whenever we're preparing steak. (ssshhhh!)

The sauce is pretty simple. Here's what you'll need:

In the pan the steaks cooked in, add the brown sugar and cook over medium heat until caramelized. Add the rum until it evaporates slightly and then add the beef broth. Bring to a boil and reduce by half. Add the coffee liqueur; continue to simmer until the sauces reduces and thickens slightly.

Altogether, a very simple, but decadent meal fit for a celebratory feast. 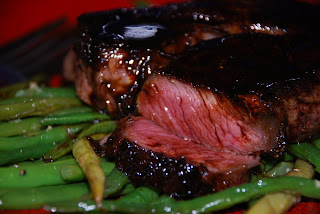 (For more pictures of our trip, including tons of food shots, check out G's photo album on flickr.)